Car air conditioning in winter. Why you should use it. Sounds bizarre, doesn’t it? Using car air conditioning in the winter months. They’re cold enough; our cars don’t need cooling down any more. Well, you’re right but if you wait until the New Year to fire it up again, you’ll be left disappointed. So why on earth is using your air conditioning in winter a good idea? We’ll let the chaps in the workshops at Roxby Road Garage explain.

How does the car air conditioning system work?

So here’s the science bit. Hopefully, this will give you a better idea of why using your air conditioning during winter is such a good idea.

The most important part of your air conditioning system is the refrigerant gas stored in the compressor. This makes the outside air crisp and cool and is probably the most critical part of the process. During the journey from the compressor to the condenser, the refrigerant gas becomes a liquid and then bonds with the outside air. After that, it travels to the drier to remove any impurities in the air, such as dust or pollen. After that, the air is almost ready to be pumped into the cabin.

The last step in the process involves a set of evaporation coils. The liquid passes over these and turns back into a gas – the cool air which you feel in the cabin. The right amount of liquid is released every time thanks to the thermal expansion valve. This limits the amount of liquid which can flow over the evaporation coils at any one time. At the end of this process, the refrigerant turns back into a gas and returns to the compressor to begin the journey again.

Still with us? Just about? That’s alright because here comes the most important part: why this process is important to you.

Hopefully, this makes our dabble into the world of science a bit clearer. The three main reasons to use your air conditioning during winter are: to keep the system lubricated for the summer, keep your windscreen demisted and limit the build-up of mould and harmful bacteria.

Keep the system lubricated for the summer months

Limit the build-up of bacteria and mould

This becomes especially important if you or someone you know suffers from asthma or allergies. Remember when we said that your car air conditioning system filtered the outside air to get rid of dust and pollen? Well, that’s a very important part of its job. If this dust and pollen are allowed to settle on the filters, it could quickly become a breeding ground for harmful bacteria that you don’t want to be breathing in.

If you switch your car air conditioning system on and there’s a funny smell, it could be a sign that bacteria is growing deep inside. This could have happened thanks to a lack of usage. To avoid this, make sure you give your air conditioning a quick blast now and then during winter. We’ll explain how shortly.

Keep the way ahead clear

When it’s cold outside, we all know how easy it is for our windscreen to get fogged up. But how? Well, when moisture settles on the windscreen, it condenses on the cold surface and creates steam. This leads to a lack of visibility and a potentially dangerous situation if you don’t clear it quickly enough. That’s where your car air conditioning system comes in. As we mentioned before, it dries the air in the cabin so moisture, steam and frost can’t form on the windscreen. Use your air conditioning to clear the windscreen in the morning rather than a cloth. You’ll notice the difference and be able to set off sooner. There are lots of obvious benefits to using your air conditioning all year round. But, the most important question of all is, how do you do it? Well, it’s one we’ve answered below.

This is the best way to use your system

Now, we’re not saying you should have your air conditioning on all the time – why would you want to make yourself even colder? No, you only need to switch it on for roughly ten to fifteen minutes every two weeks. This keeps it ticking over, but it doesn’t mean you can’t get use it more regularly.

Most importantly, you can use the heater at the same time as your air conditioning. You can sit in a warm car with the air conditioning dial turned to fully cold position. Let it warm itself up, (as it were), while you keep yourself toasty. The only thing we don’t recommend that you do is to open the windows while your air conditioning is on. They’re both doing the same job, so all you’re doing is using up more fuel.

So there you have it, a nice and simple way of keeping your air conditioning in the best possible condition for next summer’s heatwave, (if it ever turns up.) However, if you’re sitting here now thinking, ‘I’ve never done this before!’, there’s no need to panic. We’ve got a few simple steps to help you too.

Help! My air conditioning system isn’t working, what should I do?

Why has it stopped working?

Now, there’s no guarantee that yours has stopped working just because you didn’t use it over the winter. Regular use certainly helps, but if it’s been two years since your last air conditioning re-gas, your system isn’t likely to be in the greatest shape. That’s because you lose between 10 and 20% of your refrigerant gas each year. Remember how important that was? If there isn’t enough refrigerant gas being pumped around the system, you won’t feel cold air in the cabin. It’s as simple as that. How will I know if the system has stopped working?

Usually, it’s when you switch it on and don’t feel the cold air on your hand. However, there are a few warning signs that your air conditioning is about to break. If your air conditioning struggles to produce cold air, or there’s a funny smell in the cabin, it probably doesn’t have enough refrigerant gas left in the system. Your air conditioning also affects fuel economy, so if you notice yourself making more trips to the pump, a faulty system could be to blame.

How can I get my refrigerant gas recharged?

During a car air conditioning re-gas, the mechanic will replace your refrigerant gas, filling your compressor up to the recommended limit. They’ll use a specialist machine to suck all the remaining refrigerant gas out of the system and then replace it with fresh gas – unless they find a more serious problem. In that case, the mechanic will determine what the problem is, fix it and then refill your compressor.

The most common problem is a crack in the system which can cause your refrigerant gas to leak out. This can happen when you don’t use your car air conditioning system for an extended period of time, like during winter. To avoid expensive fixes in the future, you should use your air conditioning regularly.

What are the benefits of this process?

The biggest benefit to an air conditioning re-gas is the fact that you’ll have a fully charged car air conditioning system to keep you cool during the scorching summer months. We’ve all driven in a heatwave before – having air conditioning is far more comfortable, right? You’ll also have peace of mind that your system is fungus free and, because you’re placing less strain on the engine by using a faulty system, able to eek out a few extra miles from each tank of fuel. Spread bill costs with our NO INTEREST, NO FEE payment scheme.
Click here for more information We are very proud to announce our membership of the RAC Approved Garage Scheme following the RAC Customer Charter including honest pricing, quality work and exceptional customer service.
Click here for more details

BOOK YOUR TYRES AND TIME ONLINE, DRIVE IN, PAY WHEN DONE, DRIVE OFF! Simples!
Our professional tyre team at Roxby Road Garage in #Winterton go the extra mile so you can too. Amazing prices inc. fitting on all brands of #tyres to suit your budget. Book now https://t.co/fv32xfynrb https://t.co/vqtMpop5cJ
View on Twitter 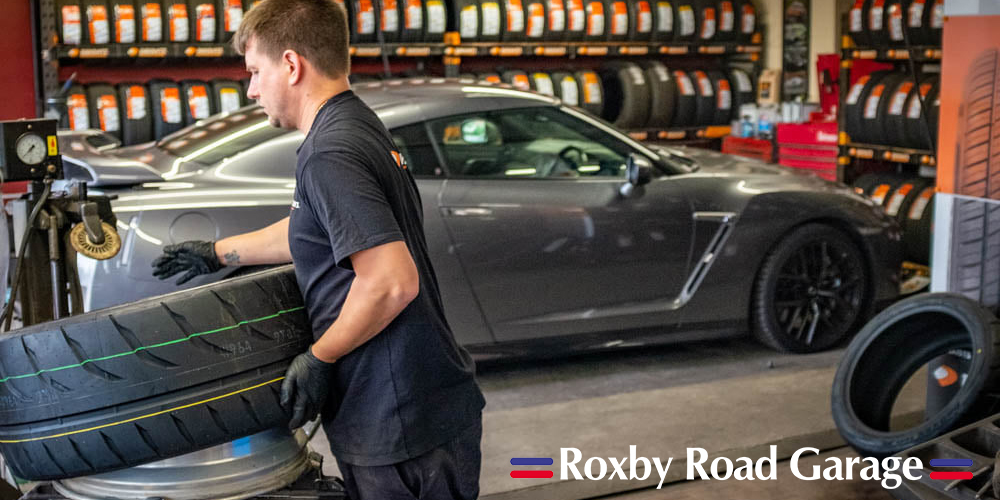 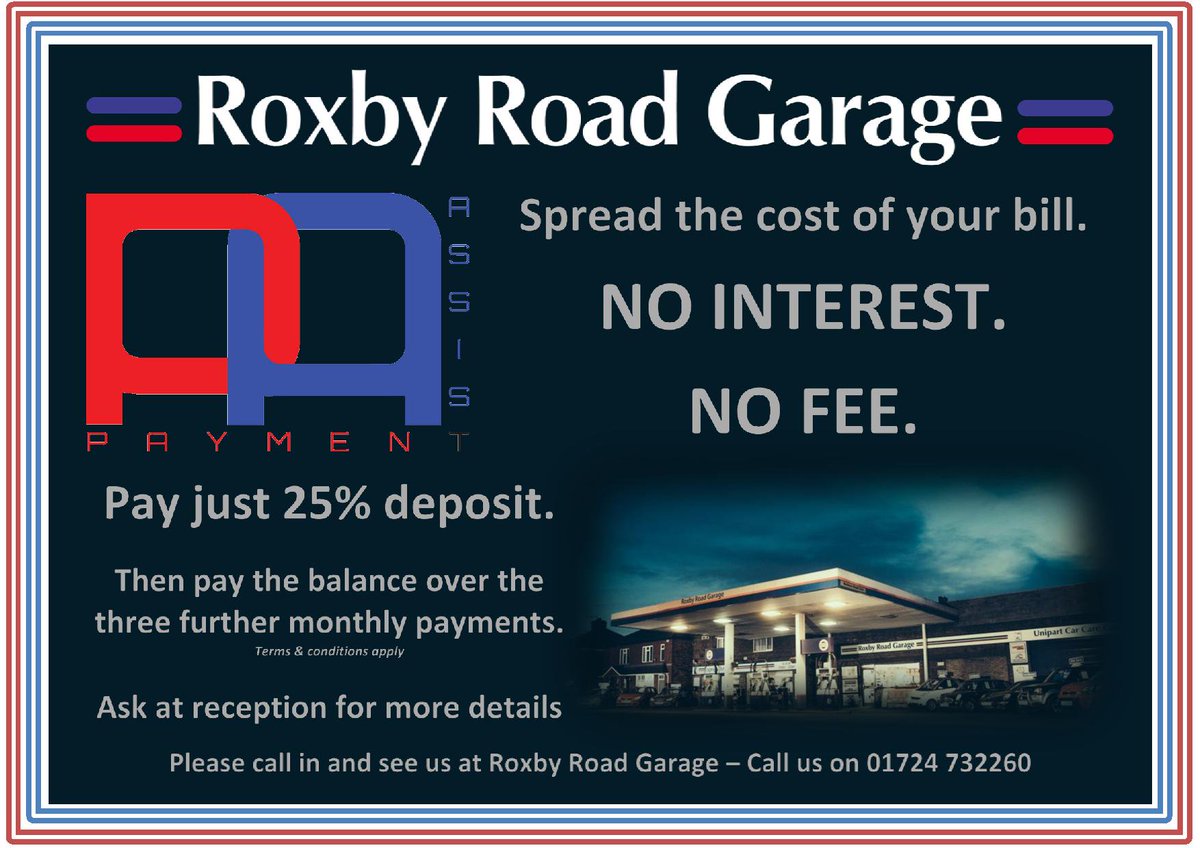 When this happens, it's usually because the owner only shared it with a small group of people, changed who can see it or it's been deleted.
View on Facebook
· Share

Our Reputation Is Your Guarantee